14 °C
View Europe with a bit of Asian twist on Szufan's travel map.

We kicked start our free day in Berlin with a Third Reith walking tour. Our local guide was a cool lady from UK who just returned from a 7-month maternity leave. She was doing a fine job giving us the details between 1933 and 1945, about how Adolf Hitler came into power, the rise of Nazi and post WWII. We were shown several historic sites eg Berlin wall, Brandenburg Gate and even the location where Hitler suicided (there was no memorial or anything, instead now just a car park with a children’s playground).

We also visited a memorial for the Jews who were killed. It was unbelievable to hear that the estimated total of six millions of them were murdered and majorly post WWII. The memorial was within Berlin CBD in an abstract art form so those who visited could have their own interpretation of it.

The walking tour concluded near noon and we finished at Checkpoint Charlie. It was used for International people to travel between East and West Berlin when the Berlin Wall was still there. An American guard and A Soviet guard would be at the checkpoint to check people through. Of course this checkpoint was no longer there or required, there was a fake station/hut there just to give tourists an insight of what it used to look like. 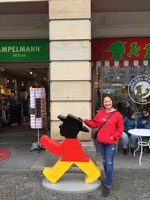 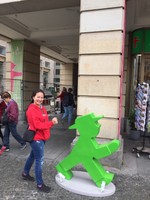 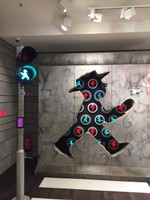 Once we left the group, we wondered around on the streets again like we did in Prague. I was thinking of visiting some extra sites but that didn’t get executed. Instead we looked around the shops because Phil wanted to buy something in Germany. It was very rare for him to be in the “shopping mood” so of course I wouldn’t miss the chance to shop along.

We visited a car place called “Drive” and even though I know very little about it, it appeared to be about automatic cars (those self driven cars). Funny I was approached by a couple of store people (one lady who was also from Taiwan! and an engineer I assumed who was not an Asian but spoke perfect Mandarin!) wanted to interview me about what I think about the those cars. I felt I wasn’t very helpful because 1) I knew nothing about it and 2) I never really spent time thinking about my feeling towards cars... it had always been a form for transport I guess but I do enjoy driving - not windy road or long distance travel though...hmm...? 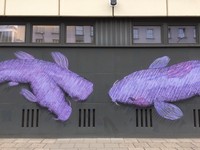 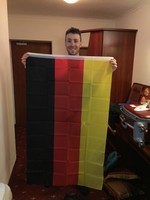 We stopped at a Vietnamese restaurant for late lunch because I really wanted something Asian. We were hoping to try their Sugarcane Juice but they ran out. Oh well - I’m sure there will be plenty of Asian food options later when we are in Taiwan. I look forward to Taiwan for a change in scenery and food. I miss my hometown.

Posted by Szufan 00:22 Archived in Germany

Previous Next Table of contents